The product is used with a manual sprayer.

Apimil® is safe for honey bees. No side effects of applying the product directly to hives have been observed. 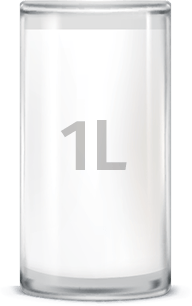 See how to use Apimil® properly,
to get the expected results.

Spray the equipment and all the elements attractive for honey bees with Apimil before starting apiary activities.

Before introducing a new honey bee queen, make sure that the colony is orphaned or find and remove the old queen. Spray the product on all the frames with honey bees.

Spray carefully the honey bee queen which is going to be introduced with the product and release it directly onto the frame. When introducing the honey bee queens to an orphaned colony, it is recommended to eliminate emergency nurseries.

When Apimil® is used, it is not a necessary condition for the honey bee queen to be accepted. However, if mature nurseries are left, several honey bee queens may appear in the colony.

In case of aggressive colonies, it is advisable to use Apimil also on protective clothing, especially on hands.

Spray the interior of the hive through the inlet opening 5-10 minutes before opening an aggressive colony.

The product must not be applied directly to the skin.

Honey bees from the colonies being combined should be sprayed on the frames and transferred to a common hive.